Dominique Swain is an American actress born in Malibu, California. She is most famous for her portrayal of the title character in the 1997 film adaptation of Vladimir Nabokov’s novel Lolita, and as Jamie Archer in the film Face/Off. She has also starred in Pumpkin, Girl, Tart, and Briar Patch. Born as Dominique Ariane Swain in Malibu, California, on August 12, 1980, to Cindy Fitzgerald and David Swain, she has four siblings: two sisters, and Alexis, and a stepsister and brother from her father’s first marriage. She began dating Marc Clebanoff in 2012. 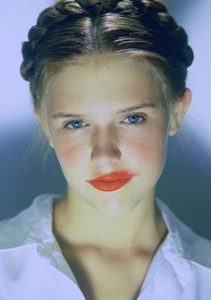 Dominique Swain Facts:
*She was born in Malibu, California on August 12, 1980.
*She enjoyed playing sports, making art, and listening to music while in high school.
*She made her acting debut in the remake of Lolita at age 15.
*At the age of 21, she became the youngest model ever to pose nude for PETA in 2001.
*She was featured on the cover of Stuff Magazine’s Feb. 2007 issue.
*She was listed #79 in Stuff magazine’s “102 Sexiest Women In The World” in 2002.
*She is a spokesperson for PETA.