Don Cherry is a Canadian ice hockey commentator, sports writer and retired professional hockey player and National Hockey League (NHL) coach. Cherry played one NHL playoff game with the Boston Bruins in 1955, and later coached the team for five seasons after concluding a successful playing career in the American Hockey League. He co-hosted Coach’s Corner—a segment aired during CBC’s Saturday-night NHL broadcast Hockey Night in Canada, with Ron MacLean from 1986 until 2019. He has also worked for ESPN as a commentator during the latter stages of the Stanley Cup playoffs. As a sportswriter, Cherry has written various books, including Don Cherry’s Sports Hereos and Don Cherry’s Hockey Stories. Born Donald Stewart Cherry on February 5, 1934 in Kingston, Canada, to parents Maude and Delmar Cherry, his father was an amateur athlete and worked as an electrician with the Canadian Steamship Lines. He has a son Tim and a daughter Cindy with his first wife Rosemarie Cherry. He married his second wife, Luba Cherry, in 1999. 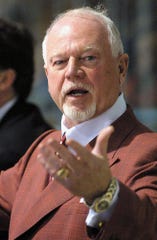 Don Cherry Facts:
*He was born on February 5, 1934 in Kingston, Canada.
*He played one NHL playoff game with the Boston Bruins in 1955.
*He won Jack Adams award as NHL coach of the year in 1976.
*CBC listed him as one of the top ten greatest Canadians in 2004.
*He considers Bobby Orr as the greatest hockey player of all time.
*He owns a bunch of “Don Cherry Restaurants” in Ontario and Atlantic Canada.
*He has an English Bull Terrier dog named Blue.
*Follow him on Twitter.