Dorian Yates is an English former professional bodybuilder who won the Mr. Olympia title six consecutive times from 1992 to 1997. Widely considered to be one of the top bodybuilders in modern history, Dorian has the fifth-highest number of Mr. Olympia awards of all time, thus ranking behind Ronnie Coleman, Lee Haney, Arnold Schwarzenegger and Phil Heath. Born Dorian Andrew Mientjez Yates on April 19, 1962 in Walmley, Warwickshire, England, he grew up in rural Staffordshire, UK. His father died of heart attack when Yates was 13. Yates started bodybuilding at the age of 21. He is married to Brazilian fitness model Glauce “Gal” Ferreira with whom he has a son named Lewis. 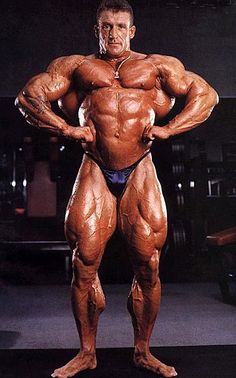 Dorian Yates Facts:
*He was born on April 19, 1962 in Walmley, Warwickshire, England.
*His ancestry includes English, Irish, Scottish, and Scandinavian.
*He started lifting in 1983.
*He won the Mr. Olympia six years in a row, from 1992 to 1997.
*He holds the fifth-highest number of Mr. Olympia awards of all time, ranking behind Ronnie Coleman (8), Lee Haney (8), Arnold Schwarzenegger (7) and Phil Heath (7).
*He published an autobiography titled Blood and Guts in 1993.
*He announced his retirement in 1997.
*He was sentenced to six months at Whatton Youth Detention Centre when Yates was a teenager.
*Follow him on Twitter, YouTube, Facebook and Instagram.