Dougie Poynter is an English musician, singer-songwriter, actor and model. He is best known as the bassist and youngest member of the pop rock band McFly, whose first single, “5 Colours in Her Hair,” was released March 2004 and entered the UK Singles Chart at number one in April 2004. Poynter’s fellow band members are Tom Fletcher (rhythm guitarist and vocals), Danny Jones (lead vocals, harmonica, and guitar), and Harry Judd (drums). Poynter co-wrote the band’s hit song “Transylvania.” In 2011, Poynter won the reality television show I’m a Celebrity Get Me Out of Here!. Born Douglas Lee Poynter on November 30, 1987 in Orsett, Essex, England, to parents Samantha and Gary L. Poynter, he has a sister named Jazzie. Poynter was educated at Herd Lane Primary School, Corringham. He has been in a relationship with model Maddy Elmer. He was previously in a relationship with Frankie Bridge of The Saturdays from 2008 to 2010, and musician Ellie Goulding from 2014 to 2016. 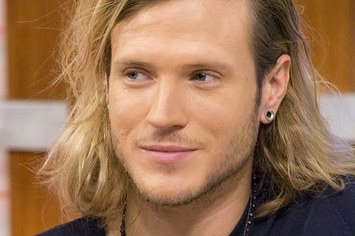 Dougie Poynter Facts:
*He was born on November 30, 1987 in Orsett, Essex, England, UK.
*At 15, he auditioned for and subsequently became the bass player for the English band McFly.
*He is signed with Storm Model Management, and is represented by CAA and Independent Talent.
*He has his own clothing line called Saint Kidd.
*Follow him on Twitter, Facebook and Instagram.