English actor who came to prominence after being cast in the BBC Two film Worried About the Boy. Booth played Mötley Crüe bassist Nikki Sixx in the 2019 American biographical comedy-drama film The Dirt. He also starred in Great Expectations, Romeo and Juliet, and Jupiter Ascending. Booth played Shem in the 2014 action-drama film Noah alongside Russell Crowe and Jennifer Connelly. 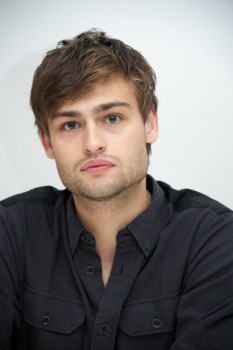 Born Douglas John Booth on July 9, 1992 in Greenwich, London, England, to parents Vivien and Simon Booth, he has an older sister named Abigail. Booth attended the National Youth Theatre and the Guildhall School of Music and Drama. He modelled in several Mario Testino-shot campaigns for the luxury fashion label Burberry in the early 2000s. He was in a relationship with Vanessa Kirby that ended in 2012.

Douglas Booth Facts:
*Born on July 9, 1992 in Greenwich, London, England, his father is of English descent, and his mother is of half Spanish and half Dutch ancestry.
*His mother and older sister are also artists.
*He was diagnosed with dyslexia.
*He played the trumpet as a child.
*He made his debut as Sefton in the 2009 film From Time to Time.
*He played Romeo Montague in Carlo Carlei’s film adaptation of Romeo & Juliet.
*Follow him on Facebook and Instagram.