American television broadcast journalist who is notable for anchoring major programs on two networks including ABC World News Tonight, Good Morning America, 20/20, and Primetime newsmagazine while at ABC News. Sawyer served as a literary assistant to U.S. President Richard Nixon from 1974 to 1978. She achieved worldwide acclaim after subjecting Mel Gibson to an intense television interrogation, after his 2006 DUI arrest. 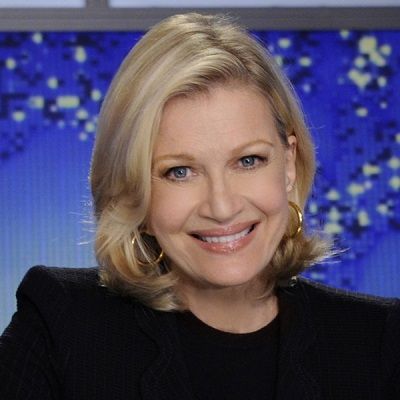 Born Lila Diane Sawyer on December 22, 1945 in Glasgow, Kentucky, to parents Jean W., an elementary school teacher, and Erbon Powers “Tom” Sawyer, a county judge, she has English, Irish, Scots-Irish, and German, ancestry. Sawyer represented the state of Kentucky at America’s Junior Miss scholarship pageant and took first prize. She graduated from Wellesley College in 1967 with a Bachelor of Arts degree in English, and finished a semester of law school before deciding on journalism. On April 29, 1988, Sawyer married film and theatre director, producer, and actor Mike Nichols. Nichols died on November 19, 2014, at the age of 83.

Diane Sawyer Facts:
*She was born on December 22, 1945 in Glasgow, Kentucky, USA.
*She started her broadcasting career as a reporter at WLKY-TV in Louisville, Kentucky.
*She became the first female newscaster on the CBS television news program 60 Minutes.
*She was a co-anchor of ABC’s morning news program Good Morning America, and was the anchor of ABC World News Tonight until 2014.
*She was an original host on ABC’s news magazine show Primetime alongside Sam Donaldson.
*She is close friends with Robin Roberts.
*She was in relationships with Frank Gannon, aide to President Richard Nixon, as well as American diplomat Richard Holbrooke.
*She has a dog named Lila, which is also her first name.
*Follow her on Twitter, Facebook and Instagram.