Drake is a Canadian rapper and actor. He first gained fame by playing the role of Jimmy Brooks in Degrassi: The Next Generation, for which he received five Young Artist Award nominations. He is best known for his hit singles “God’s Plan,” “Take Care,” “One Dance,” and “Hotline Bling.” Drake released his debut studio album Thank Me Later in 2010, which debuted at #1 on the US Billboard 200 and was soon certified platinum. Drake’s second album Take Care won the Grammy Award for Best Rap Album and was certified quadruple platinum. His fifth studio album, Scorpion was released in June 2018 and again debuted at #1 in Canada and in the US. He has the most number one singles on the US Hot Rap Songs chart with fifteen, and the most number one singles on the US Hot R&B/Hip-Hop Songs chart with nineteen. He is the recipient of 161 awards from 532 nominations, including a conservative 4 Grammy Awards from forty-two nominations. Born Aubrey Drake Graham on October 24, 1986 in Toronto, Canada, to parents Sandi and Dennis Graham, his father is an African American and his mother is an Ashkenazi Jewish Canadian. In his youth, he attended a Jewish day school. He began his acting career in 2001. He has dated Rihanna, Jennifer Lopez, Sophie Brussaux, and tennis icon Serena Williams. 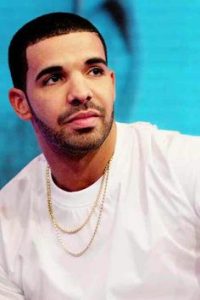 Drake Facts:
*He was born on October 24, 1986 in Toronto, Canada.
*His parents divorced when he was five years old.
*He is a dual Canadian/American citizen.
*He has won a total of 4 Grammy Awards from 42 nominations.
*He voiced the character Ethan in the 2012 film Ice Age: Continental Drift.
*He has collaborated on songs with prominent artists such as Nicki Minaj, Lil Wayne and Kanye West.
*His favorite actor is Denzel Washington, and his favorite band is N.E.R.D..
*He is good friends with Al Mukadam.
*He speaks Spanish fluently.
*He is a huge fan of Adele.
*He has tattoos of Aaliyah, Denzel Washington, multiple tattoos of Sade, Rihanna, Lil Wayne, Skepta, Popcaan, and his late friend Fif.
*He has two dogs named Winter and Diamond.
*Visit his official website: www.drakeofficial.com
*Follow him on Twitter, YouTube, Facebook and Instagram.