Ice Cube is an American rapper, actor and writer. He first achieved fame as a member of the legendary rap group N.W.A. alongside Eazy-E, Dr. Dre, DJ Yella, MC Ren and Arabian Prince. He released his debut solo album, AmeriKKKa’s Most Wanted in 1989. Ice Cube’s 3rd solo album, The Predator, debuted at #1 on both the pop and R&B charts. He made his film debut as Doughboy in Boyz n the Hood in 1991. He also appeared in the films Trespass, Barbershop, Ride Along, 21 Jump Street, Dangerous Ground and Anaconda. He also appeared in the 1993 comedy CB4. Born O’Shea Jackson on June 15, 1969 in Baldwin Hills, California, USA, to parents Doris and Hosea Jackson, he has an older brother as well as a half-sister who was murdered when Ice Cube was 12. He attended and graduated from William Howard Taft High School in Woodland Hills, California. He began his career as a member of the hip-hop group C.I.A. and later joined the seminal rap group N.W.A. He has been married to Kimberly Woodruff since November 28, 1992. They have four children. 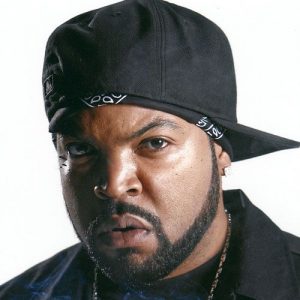 Ice Cube Facts:
*He was born on June 15, 1969 in Baldwin Hills, California, USA.
*His real name is O’Shea Jackson.
*He initially gained attention as a member of the hip hop group C.I.A. in 1984.
*He was ranked #8 on MTV’s Greatest MCs of All Time list.
*He is friends with Kevin Hart and Ice-T.
*He is a supporter of the Oakland Raiders American Football team.
*Visit his official website: www.icecube.com
*Follow him on Twitter, YouTube, Facebook and Instagram.