Draya Michele is an American model, reality television personality, actress, fashion designer, and entrepreneur. She was a cast member of the popular reality TV show, Basketball Wives LA in 2011. She played Holly in the 2016 romantic comedy film The Perfect Match, and appeared in an episode of Real Husbands of Hollywood. Born Andraya Michele Howard on January 23, 1985 in Reading, Pennsylvania, she is of African American descent on her father’s side, and of Italian descent on her mother’s side. She attended Reading Senior High School. In January 2013, Draya began dating Orlando Scandrick and they became engaged in June 2015. [© celebsfacts.com] She has two sons named Kniko and Jru. 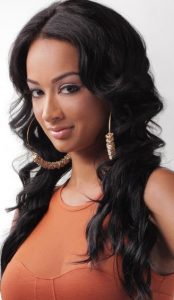 Draya Michele Facts:
*She was born on January 23, 1985 in Reading, Pennsylvania, USA.
*She belongs to both African American and Italian descent.
*She launched her exclusive collection of swimwear under the label of “Mint Swim” in 2011.
*In 2013, she launched her clothing line, Fine Ass Girls.
*In November 2016, Draya launched another clothing range under the label of Beige & Coco.
*Follow her on Twitter, YouTube, Facebook and Instagram.