Drew Sidora, born May 1, 1985, is an American actress and singer who made her acting debut at age ten in the 1995 TV movie Divas. She is known for her recurring role as Chantel in the Disney Channel Original Series That’s So Raven. She played supporting roles in White Chicks, Wild Hogs, and Step Up. Sidora was born in Chicago, Illinois, USA as Drew Sidora Jordan. She gave birth to her first son, Josiah, on May 21, 2011. Child’s father is her ex-boyfriend. She married Ralph Pittman in August 21, 2014. They have a son named Machai David Pittman. 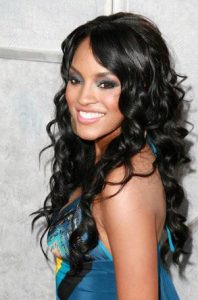 Drew Sidora Education:
She studied music and theater since the age of 2.

Drew Sidora Facts:
*She studied music and theater since the age of 2.
*Her 1st son, Josiah’s father is her ex-boyfriend.
*At age 9, she appeared in the Fox TV movie Divas, acting alongside Khalil Kain, Lisa Nicole Carson, and Nicole Ari Parker.
*Follow her on Twitter and Myspace.