Eden Espinosa is an American actress and singer. She is best known for her portrayal of Elphaba in Wicked on Broadway and in Los Angeles and San Francisco. She originated the title character of the Broadway musical “Brooklyn”, for which she received a 2005 Drama League Award nomination. She also starred as Maureen in the final cast of the Original Broadway run of Rent. Her television credits include Ugly Betty, Elementary, Dog Whisperer and Law & Order. On December 18, 2012, she released her debut album, Look Around, which debuted at #41 on the iTunes Pop Charts. Born Eden Erica Espinosa on February 2, 1978 in Anaheim, California, to parents Eddie and Elsie, she belongs to Mexican descent. She started singing at the age of three, performing at age five, and recording at the age of ten. She performed at the Disneyland and Universal Studios theme parks before becoming a Broadway actress. She Joined the Broadway production of “Wicked” in the role of Elphaba on Jan 10, 2006. She married Joseph Abate in 2010. 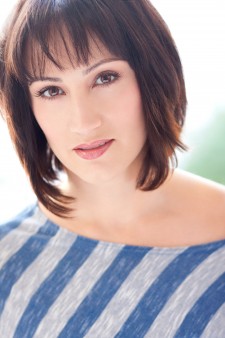 Eden Espinosa Facts:
*She was born on February 2, 1978 in Anaheim, California, USA.
*She got her first Disneyland job as a caroler in the Christmas Fantasy Parade at the age of 17.
*She made her Broadway debut as a member of the original Broadway cast of Stephen Schwartz’s musical Wicked.
*Visit her official website: www.edenespinosa.com
*Follow her on Twitter, Facebook and Instagram.