Eden Hazard is a Belgian professional footballer who who plays as a winger or attacking midfielder for Spanish club Real Madrid and the Belgian national team. He plays mainly as an attacking midfielder but can also play as a wide midfielder. He played for Chelsea from 2012 until 2019, and joined Real Madrid in a transfer worth up to €150 million, winning La Liga in his first season. Born Eden Michael Hazard on January 7, 1991 in La Louvière, Belgium, to Carine and Thierry Hazard, he began his football career for the Royal Stade Brainois youth club when he was four years old. He debuted with Belgium’s national team in 2008. He has been married to Natacha Hazard since 2012. They have three children: Leo, Yannis and Samy. 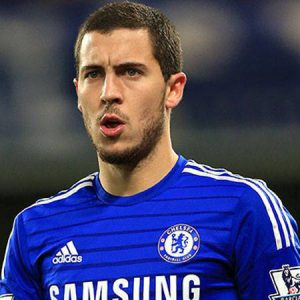 Eden Hazard Facts:
*He began his youth career with Royal Stade Brainois at age 4.
*He played for U-17 and U-19 national teams.
*He won the FWA Footballer of the Year and PFA Players’ Player of the Year awards in 2014-2015 season.
*He is best known for his playing style, which has led to the media, coaches, and players drawing comparisons to Ballon d’Or winners Lionel Messi and Cristiano Ronaldo.
*Follow him on Twitter, Facebook and Instagram.