Nikki Sixx is an American musician, songwriter and radio host. He is best known as the co-founder, bassist, and primary songwriter of the hard rock band Motley Crue. Born Frank Carlton Serafino Ferrana on December 11, 1958 in San Jose, California, to Deana Richards and Frank Ferranno, he grew up in Seattle, Washington. He is of Italian descent on his father’s side. He married Courtney Sixx in 2014. He was previously married to Brandi Brandt and Donna D’Errico. He has four children: Frankie-Jean, Storm, Decker and Gunner. 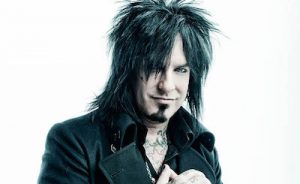 Nikki Sixx Facts:
*He was partially raised by his single mother, Deana Richards.
*He formed the group Mötley Crüe with drummer Tommy Lee.
*In 2006, he launched the clothing line “Royal Underground” with Kelly Gray.
*He was previously in a relationship with tattoo artist Kat Von D.
*He was once engaged to singer Vanity. (1987)
*He has tattoos all over his body.
*He used to work odd jobs, such as selling vacuums over the phone and working in a liquor store.
*He spent most of his growing years listening to Deep Purple, Harry Nilsson, The Beatles, The Rolling Stones, Elton John, Queen, and later discovered T.Rex, Slade and David Bowie.
*Follow him on Twitter, Facebook and Instagram.