Edita Vilkeviciute is a Lithuanian model who has appeared in campaigns for many important fashion houses such as H&M, Mango, Esprit, Next Uk, Victoria’s Secret, Massimo Dutti, YSL, D&G, and Calvin Klein. She has walked for designers such as Chloe, Shiatzy Chen, Chanel, Stella McCartney, Givenchy, Yves Saint Laurent, Zac Posen, and Dolce & Gabbana. She has also appeared on the cover or been featured in many international fashion magazines including Marie Claire, Vogue, Numéro, and i-D. In 2013 Vilkeviciute became the new face of Bulgari Omnia Crystalline Fragrance and she appeared in the Fall campaign ads of Juicy Couture. In 2014 she became the face for Viktor & Rolf ‘Bonbon’ Fragrance Campaign shot by Inez & Vinoodh. Vilkeviciute’s official agencies are DNA Model Management (New York), VIVA Model Management (Paris, London, Barcelona), Why Not Model Management (Milan), and Priscilla’s Model Management (Sydney). 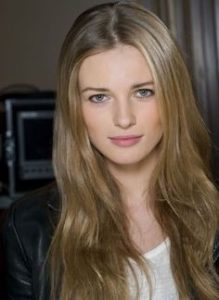 Edita Vilkeviciute Facts:
*She was born on January 1, 1989 in Kaunas, Lithuanian SSR, USSR [now Lithuania].
*Her parents are Regina and Gediminas Vilkevičius.
*She played basketball as a child.
*She was discovered on the streets of her hometown by a model scout from Women Management.
*At age 16, she was signed to Women Management in Milan, and later, VIVA in Paris in 2006.
*She made her runway debut at Just Cavalli for the spring/summer 2006 shows in Milan.
*She’s listed as an “Industry Icon” by models.com.
*In 2012, she appeared in Pirelli Calendar, which was shot by Mario Sorrenti.
*She is also an accomplished pianist,and plays the guitar, drums, and accordion.
*One of her modeling idols is Claudia Schiffer.
*She is friends with models Snejana Onopka, Baptiste Giabiconi, Lasse Pedersen, Laura Blokhina, Giedrė Dukauskaitė, Egle Tvirbutaite, Elena Melnik, Zuzana Straska, and Zuzana Gregorova.
*She married Björn Frederic Gerling in July 2017.