Eduardo Santamarina is a Mexican actor of film, theater, and television. He is best known for his roles in the telenovelas Marisol and Rubi. He played Leonardo Cornejo Fernández in the telenovela Ni contigo ni sin ti. He made his film debut in 2002 with the Mexican films Bano de Mujeres and Ya No Los Hacen Como Antes. He was born in Veracruz, Mexico on July 9, 1969. He married actress Itatí Cantoral in 2000, and the couple had twin boys José Eduardo and Roberto Miguel in August 2000 before getting divorced in 2004. Since 2009, he has been married to Mayrín Villanueva, with whom he has a daughter, Julia. 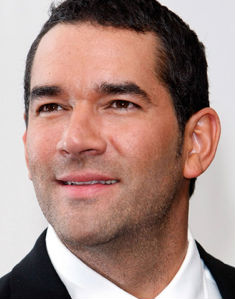 Eduardo Santamarina Facts:
*He made his acting debut in De Frent al Sol (1992).
*He owns a restaurant in Veracruz and a catering company.
*He once dated actress Susana González.
*Visit his official website: www.eduardosantamarina.net
*Follow him on Twitter and Facebook.