Mayrin Villanueva is an actress and model from Mexico. She is best known for portraying the main leads in the telenovelas Mi Corazon Es Tuyo and Mentir Para Vivir. She is also known for playing the role of Silvia Olvera in Vecinos since 2005. For her performance in the Televisa series Nina Amada Mia, she won a TVyNovelas Awards for Best Female Revelation. Born as Mayrin Villanueva Ulloa on October 8, 1970 in Mexico City, Distrito Federal, Mexico, she married actor Jorge Poza in 1997, and the couple had twin children in August 2003 before getting divorced in 2008. She then married actor Eduardo Santamarina and gave birth to their daughter in 2009. 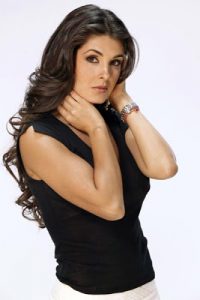 Mayrin Villanueva Facts:
*She has appeared in multiple magazines.
*She was considered for the role of Julia Montaño in the 2004 telenovela Apuesta por un Amor, the role eventually went on to another actress, Patricia Manterola.
*Visit her official website: www.mayrinvillanueva.mex.tl
*Follow her on Twitter, Facebook and Instagram.