Elena Paparizou is a Greek-Swedish singer, songwriter and television personality, best known for being a member of the Greek-Swedish duo Antique, alongside her childhood friend, and fellow Greek-Swede, Nikos Panagiotidis. The duo placed third in the 2001 Eurovision Song Contest representing Greece with the song “Die For You”. Antique disbanded in 2003. Paparizou won Eurovision 2005 competition with song “My Number One” representing Greece. In June 2004, Paparizou released her debut solo album Protereotita, which yielded the singles “Anditheseis”, “Katse Kala” and “Stin Kardia Mou Mono Thlipsi”. She is the recipient of various accolades including; three Arion Music Awards, a European Border Breakers Award, 28 MAD Video Music Awards and an MTV Europe Music Award. Born on January 31, 1982 in Borås, Sweden, to Greek immigrant parents Georgios and Efrosini Paparizou, she grew up in Örgryte, Gothenburg. She has a sister Areti and brother Konstantinos. She has been married to Andreas Kapsalis since June 2015. 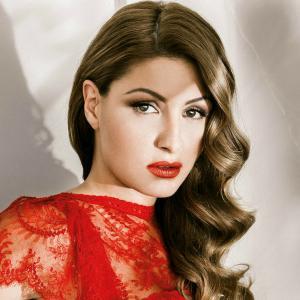 Elena Paparizou Facts:
*She was born on January 31, 1982 in Boras, Sweden.
*Her parents are Georgios and Efrosini Paparizou.
*She became interested in the arts at a young age, attending singing, dancing and acting classes alongside her academic studies.
*At 7, she began lessons in piano, ballet and Greek dance.
*She placed 3rd with her group Antique in the 2001 Eurovision Song Contest representing Greece with the song “Die For You”.
*In 2005, Elena represented Greece in the Eurovision Song Contest with her song “My Number One”, which she won.
*On December 25, 2008, Paparizou’s father died of a heart attack.
*She speaks Greek, Swedish and English fluently.
*Visit her official website: www.helenapaparizou.com
*Follow her on Twitter, YouTube, Facebook and Instagram.