Elin Kling is a Swedish fashion blogger and journalist who co-founded digital media company Fashion Networks with Christian Remröd in 2009. She is also co-founder of women’s clothing label Totême. In 2011, Kling launched her first clothing line, Elin Kling for H&M and became the first blogger to design a collection for H&M. Born on February 17, 1983 in Mariestad, Sweden, to parents Inger Magnusson and Thomas Kling, she has one sister named Cecilia. Kling started her career in fashion at Swedish lifestyle magazine Solo, and worked as head of the fashion desk at Sweden’s second largest newspaper, Expressen. She has been married to Karl Lindman since 2014. They have a daughter together. 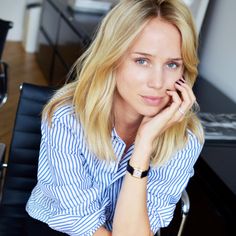 Elin Kling Facts:
*She was born on February 17, 1983 in Mariestad, Sweden.
*She started blogging in 2007.
*She became head stylist for Swedish Idol in 2009.
*She co-founded digital media company Fashion Networks in 2009.
*She took part in Let’s Dance 2010.
*In 2011, she launched her first clothing line, Elin Kling for H&M.
*She launched her own magazine, Styleby in 2011.
*She created a collection for Guess by Marciano in 2012.
*She launched the clothing line Totême with her husband, Karl Lindman in 2014.
*Visit her official website: www.elin-kling.com/the-wall
*Follow her on Twitter, Pinterest, Tumblr, Facebook and Instagram.