Elizabeth Berkley is an American film and television actress and reality show personality. She is best known for portraying Jessie Spano in the television series Saved by the Bell, and as Nomi Malone in the 1995 Paul Verhoeven film Showgirls. She is also known for her roles in the films The First Wives Club and Any Given Sunday, and on television shows like NYPD Blue and Titus. In September 2013, she competed on the 17th season of Dancing with the Stars with Valentin Chmerkovskiy. She is also a New York Times bestselling author, and has written a book entitled Ask Elizabeth, a self-help and motivational guide for teenage girls. Born on July 28, 1972 in Farmington Hills, Michigan, to Jewish parents. Her mother, Jere, owns a gift basket business and her father, Fred, is a lawyer. Her parents enrolled her at Detroit Dance Company when she was five years old. She has a older brother named Jason. She attended the Cranbrook Kingswood School, a private school in Bloomfield Hills, and graduated from North Farmington High School in 1990. She worked as a model for Elite before pursuing an acting career. She made her television film debut with a role in the 1987 television film Frog. She married Greg Lauren in 2003. Together they have one son, Sky Cole Lauren. 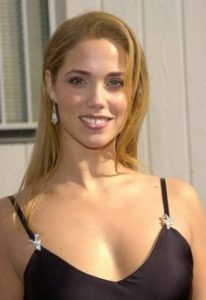 Elizabeth Berkley Facts:
*She was born in Farmington Hills, Michigan on July 28, 1972.
*She is a vegetarian.
*She is good friends with Carla Gugino and Lauren Bush Lauren.
*In 2006, she started her own website: www.ask-elizabeth.com.
*Follow her on Twitter and Instagram.