Cristine Prosperi is a Canadian actress born in Toronto, Ontario. She is best known for playing the role of Imogen Moreno in Degrassi, for which, she won 2012 Young Artist Awards held in LA for Best Actress in a TV Drama Series. She also portrayed Tiara Turner on the Family Channel series Really Me, and Mikayla in the TeenNick series Open Heart. She also starred as Aria in the 2012 web series Totally Amp’d, and co-starred in the 2013 Nickelodeon television movie Nicky Deuce. Born Cristine Victoria Prosperi on April 7, 1993 in Toronto, Ontario, Canada, she has an older brother named Joe. She is of Greek descent on her father’s side, and of English and Italian descent on her mother’s side. She began her career playing small roles in the 2007 movies Stir of Echoes: The Homecoming and Your Beautiful Cul de Sac Home. She was in a relationship with Canadian ice hockey player Ben Fanelli from 2010 to 2012. In August 2012, she began dating another ice hockey star Jeff Skinner. 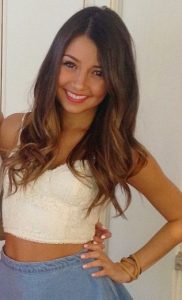 Cristine Prosperi Facts:
*She was born on April 7, 1993 in Toronto, Ontario, Canada.
*Her favorite TV show is Breaking Bad.
*Kendall and Kylie Jenner are her style icons.
*Fish, sushi, and broccoli are her favorite foods.
*She has a pet dog named Ocean, and a fish named Sloan.
*Visit her official website: www.styleprosperity.com
*Follow her on Twitter and Instagram.