Elizabeth Mitchell, born March 27, 1970, is an American actress known for her role as Dr. Juliet Burke on the ABC series Lost. Her other roles include V, Revolution, Once Upon A Time, Dead of Summer, The Santa Clause 2 & 3, Gia and The Purge: Election Year. Mitchell was born in Los Angeles as Elizabeth Joanna Robertson. She has two younger sisters Kristina Helen “Kristie” Mitchell and Katherine Day “Kate” Mitchell. She was married to actor Chris Soldevilla from 2004 to 2013, with whom she has one son, Christopher Joseph. 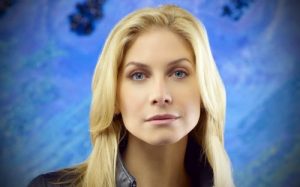 Elizabeth Mitchell Facts:
*She is the eldest of three sisters.
*She was nominated for a Primetime Emmy Award for Outstanding Guest Actress in a Drama for Lost.
*She has taken training in stage combat techniques such as dagger, rapier, and hand to hand.
*She worked at the Dallas Theater Center for six years and a year at Encore Theater.