Loni Anderson, born August 5, 1946, is an American actress best known for her sexy role as Jennifer Marlowe in WKRP in Cincinnati. She was born Loni Kaye Anderson in Saint Paul, Minnesota, and grew up in suburban Roseville. She is the daughter of Maxine Hazel and Klaydon Carl “Andy” Anderson. She belongs to English and Swedish descent. She has been married to Bob Flick since 2008. She was married to Burt Reynolds (m. 1988–1994), Ross Bickell (m. 1974–1981), Bruce Hasselberg (m. 1964–1966). She has two children named Quinton and Deidre. 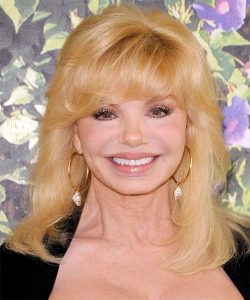 Loni Anderson Facts:
*She has English and Swedish ancestry.
*She was voted Valentine Queen at her school’s formal.
*She had worked as a schoolteacher to support herself and her daughter, while completing her college education.
*She has been married 4 times: to Bruce Hasselberg, Ross Bickell, Burt Reynolds, and Bob Flick in 2008.