Elizabeth Reaser is an American actress who appears in film, television and theater. She is known for her roles in television, such as True Detective, The Ex-List, Saved, The Good Wife, and Grey’s Anatomy, and in the films Sweet Land, Young Adult, Ouija: Origin of Evil, Stay, Against the Current, The Family Stone and The Twilight Saga. She made her film debut in 2001 as Miriam in The Believer. Born Elizabeth Ann Reaser on June 15, 1975 in Bloomfield, Michigan, she is the daughter of Karen Davidson and John Reaser. She belongs to German, Swedish, English, Irish, Scottish, and Austrian descent. She earned her bachelor’s degree in Fine Arts from Juilliard School. 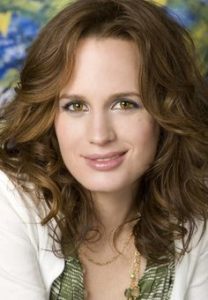 Elizabeth Reaser Facts:
*She was the middle of three sisters.
*Her mother married billionaire businessman William Davidson in 1995.
*Throughout her younger years, she wanted to become an actor.
*She was registered by PETA as a vegetarian.
*She worked as a caddy at a country club before she took up acting.
*Follow her on Twitter and Instagram.