Jolene Blalock is an American television and film actress and model. She is most famous for her portrayal of Vulcan T’Pol on Star Trek: Enterprise. She played Catalina in the comedy film Sex Tape. She was born on March 5, 1975 in San Diego, California, USA as Joelene K. Blalock. She spent much of her childhood developing surfing and artistic skills. She married Live Nation CEO Michael Rapino in 2003. They have three sons, Rivers, Ryder and Rexton. 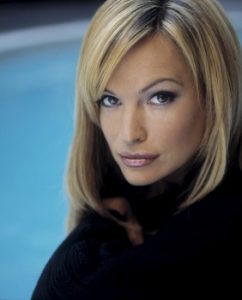 Jolene Blalock Facts:
*She was born and raised in San Diego, California.
*She started acting in school plays and started modeling in her teens.
*She left home to pursue a modeling career in Europe and Asia at age 17.
*She is an Avid surfer from childhood.
*FHM named her 10th sexiest woman in the world in 2003.
*While hrowing up, she was a huge fan of the original Star Trek (1966) series.
*In 2002, she was placed number 94 in Stuff magazine’s “102 Sexiest Women in the World”.
*She has two dogs and a cat.