Elizabeth Taylor was a British-American actress who made her film debut at the age of nine in One Born Every Minute in 1942, and rose to stardom with National Velvet in 1944. She is one of the great screen actresses of Hollywood’s Golden Age. Two-time Academy Award-winning actress Taylor was born as Elizabeth Rosemond Taylor in Hampstead, London, England to American parents Sara Sothern and Francis Lenn Taylor. 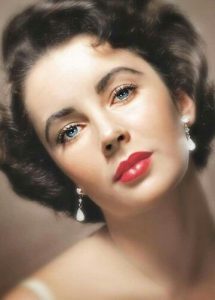 Elizabeth Taylor Facts:
*She appeared in over 1,000 magazine covers around the world.
*She appeared solo on the cover of PEOPLE magazine 14 times, second only to Princess Diana (as of 1996).
*She appeared in 11 films with Richard Burton, including Who’s Afraid of Virginia Woolf?
*Her final wedding cost an estimated $1.5 million.
*She was voted the 11th Greatest Movie Star of all time by Entertainment Weekly.
*In 1995, Empire magazine ranked her one of the 100 Sexiest Stars in film history (#16).