Younes Bendjima is an Algerian boxer-turned model best known for his high profile relationships with popular celebrities such as Jourdan Dunn and Kourtney Kardashian. He rose to international fame once he began dating Kourtney Kardashian in 2017. As a model, he has been featured on the cover of several magazines such as Vanity Teen, OOTB, Bite and Coitus. He also worked with brands such as Ralph Lauren and Calvin Klein. Younes was born on May 5, 1993 in Algeria. His parents divorced when he was young. His mother moved to Paris, and he moved to New York, with his father. He grew up there with his father, where his father ran a traditional Algerian restaurant. 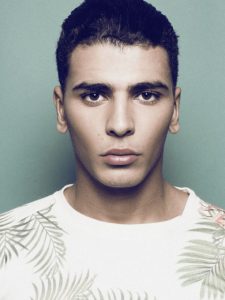 Relationships / Affairs / Girlfriend:
He was in a relationship with Victoria’s Secret model Jourdan Dunn from May 2015 to October 2016.
He reportedly began dating Kourtney Kardashian in October of 2016, just one week after his split from previous girlfriend Jourdan Dunn.

Younes Bendjima Facts:
*He is one of the leading male fashion models.
*Before becoming a boxer, he used to work in his father’s restaurant.
*He gave up on his boxing career to become a model, he was approached by a scout to be a model in 2011.
*He is multilingual and can converse in French, English, and Arabic fluently.
*He walked the runway for Givency.
*He has been featured on the cover of several magazines such as Vanity Teen, OOTB, Bite and Coitus.
*Follow him on Instagram.