British singer and songwriter best known for her collaborations with Rudimental on their UK number one single “Waiting All Night”, which won the 2014 Brit Award for British Single of the Year, with DJ Fresh on his single “Gravity”, and with Sigala on their singles “Just Got Paid”, and “Came Here for Love”. Ella Eyre released her debut EP, Deeper, in 2013 and her debut album, Feline, in 2015. 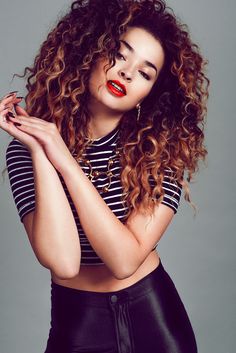 Born Ella McMahon on April 1, 1994 in London, United Kingdom, her father is a chef and her mother is a cake designer. She was educated at Millfield School in Somerset, and attended the BRIT School for Performing Arts and Technology, where she studied musical theatre. She began dating Rixton’s drummer, Lewi Morgan in 2015.

Ella Eyre Facts:
*Born on April 1, 1994 in London, United Kingdom, she is of Afro-Jamaican, British, and Maltese descent.
*She trained as a competitive swimmer before she began singing professionally.
*She was discovered in 2011 via vocal coach by Tileyard Music and Authority Management.
*She started songwriting at the age of 17.
*She was signed to Warner/Chappell Music in July 2012.
*Her debut EP Deeper was released on December 15, 2013 by Virgin/EMI.
*Ella released her debut studio album Feline via Virgin EMI records on August 28, 2015.
*Lauryn Hill, Etta James, Hans Zimmer and Basement Jaxx are among her her musical influences.
*Visit her official website: www.ellaeyre.com
*Follow her on Twitter, SoundCloud, YouTube, Facebook and Instagram.