American television journalist, presenter, producer, and author who is the founder of Katie Couric Media, a multimedia news and production company. From 2013 to 2017, Katie was Yahoo’s Global News Anchor and worked for NBC News from 1989 to 2006, CBS News from 2006 to 2011, and ABC News from 2011 to 2014. Katie’s children’s books The Brand New Kid and The Blue Ribbon Day were illustrated by Marjorie Priceman and published by Doubleday. 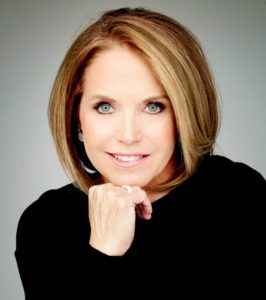 Born Katherine Anne Couric on January 7, 1957 in Arlington, Virginia, to parents Elinor Tullie and John Martin Couric, her ancestry includes French, English, Scottish, and German. Katie did her schooling from Jamestown Elementary, Williamsburg Middle School, and Yorktown High School, and graduated from University of Virginia with a bachelor’s degree in American Studies in 1979. She has two daughters named Ellie and Caroline.

Katie Couric Facts:
*She was born on January 7, 1957 in Arlington, Virginia, USA.
*She was a member of the high school cheerleader group.
*She earned an English degree from the University of Virginia in 1979.
*She began her journalism career as an assistant at the ABC network.
*She was named one of People Magazine’s ’25 Most Intriguing People of 2001′.
*She was inducted into the Television Hall of Fame in 2014.
*Her style icons are Katharine Hepburn, Audrey Hepburn, and Grace Kelly.
*She is good friends with Matt Lauer, Bryant Gumbel and Larry King.
*Visit her official website: www.katiecouric.com
*Follow her on Twitter, YouTube, Facebook and Instagram.