Ellen DeGeneres is an American stand-up comedian, television host and actress, best known for hosting the popular talk show The Ellen DeGeneres Show. She starred in two popular television sitcoms, Ellen from 1994 to 1998 and The Ellen Show from 2001 to 2002. As an actress, Ellen starred in Mr. Wrong, EDtv, and The Love Letter, and voiced the character Dory in the Pixar animated films Finding Nemo and Finding Dory. Born Ellen Lee DeGeneres on January 26, 1958 in Metairie, Louisiana, USA, to parents Elliott and Betty DeGeneres, she has one older brother named Vance. She attended and graduated from Atlanta High School in Atlanta, Texas, in May 1976. Following her high school graduation, DeGeneres attended the University of New Orleans as a communications major, but she dropped out after a semester. She used to work as a paralegal before becoming a comedian. In August 2008, she married Australian actress Portia de Rossi. She was previously in a relationship with Anne Heche from 1997 until 2000 and Alexandra Hedison from 2001 until 2004. 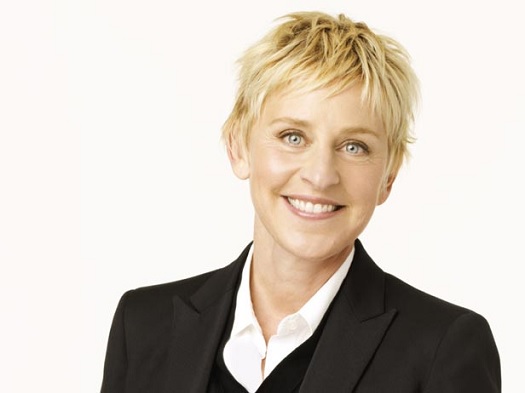 Ellen DeGeneres Facts:
*She was born on January 26, 1958 in Metairie, Louisiana, USA.
*She belongs to French, English, German, and Irish descent.
*She was raised as a Christian Scientist until age 13.
*She used to work as a bartender and house painter and was a waitress at TGI Friday’s.
*She was named the 50th most powerful woman in the world by Forbes in 2015.
*She came out publicly as a lesbian in an appearance on The Oprah Winfrey Show.
*She owns a production company called A Very Good Production.
*She has two dogs named Muffin and Bootsie.
*She is a big fan of the racquet sport badminton.
*Her first celebrity crush was the King of Pop Michael Jackson.
*She received her star on the Hollywood Walk of Fame at 6270 Hollywood Boulevard in Hollywood, California, on September 4, 2012.
*Visit her official website: www.ellentube.com
*Follow her on Twitter, YouTube, Pinterest, Facebook and Instagram.