Ellie Goulding is an English singer and songwriter, known for her high energy concerts. In 2010 she released her first studio album, Lights, which achieved remarkable success, reaching #1 on the UK charts. She collaborated with Skrillex on the song “Summit” and her 2010 Elton John cover “Your Song” reached #1 in the UK. She sang at the wedding of Prince William and Catherine Duchess of Cambridge in London on April 29, 2011. Born Elena Jane Goulding on December 30, 1986 in Hereford, Herefordshire, to Arthur and Tracey Goulding, she has a brother and two sister. She attended the University of Kent, where she discovered electronic music and wrote “Wish I Stayed.” She was once in a relationship with singers Dougie Pointer and Ed Sheeran. 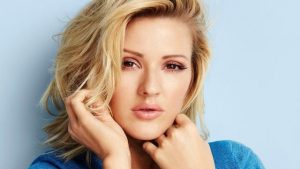 Ellie Goulding Facts:
*She is of English descent.
*Her parents separated when Ellie was five years old.
*Her career began when she met record producer Starsmith and Frankmusik.
*Her musical influences are Kanye West and Björk.
*She is a cheese addict.
*She is a vegan.
*She often wears a crop top during her concerts.
*Fleetwood Mac ‘s ‘Dreams’ is her favorite song.
*She is close friends with Taylor Swift and Cara Delevigne.
*She is left-handed, but considers herself ambidextrous.
*She supports the UK Labour party.
*Visit her official website: www.elliegoulding.com
*Follow her on Twitter, YouTube, SoundCloud, Facebook and Instagram.