Jaime Pressly is an American actress and model. She is most famous for her portrayal of Joy Turner on the television series My Name is Earl, for which she was nominated for two Emmy Awards as well as a Golden Globe Award and a Screen Actors Guild Award. She can also be recognized for her roles as Priscilla in the 2001 film Not Another Teen Movie and as Tina Armstrong in the 2006 film DOA: Dead or Alive. Born Jaime Elizabeth Pressly on July 30, 1977 in Kinston, North Carolina, to Brenda Sue and James Liston Pressly, she was raised in a Christian family. She spent nearly 11 years training in gymnastics and dancing. She attended Costa Mesa High School in California. She started dating DJ Eric Cubiche in October 2004, and in 2007 they welcomed a son named Dezi James. The couple separated in 2008. She was married to Simran Singh from 2009 to 2011. She later began dating Hamzi Hijazi, with whom she welcomed twin boys named Leo and Lenon in October 2017. 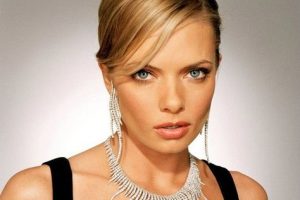 Jaime Pressly Facts:
*She was raised in a Christian family.
*As a child, she was active in dancing and gymnastics. She spent nearly 11 years training in gymnastics and dancing.
*She was arrested for DUI (Driving Under the Influence) on January 5, 2011.
*She was ranked #8 in Stuff magazine’s “102 Sexiest Women in the World” in 2002.
*She has a tattoo on her lower back of a blue Leo sign with some writings in the Japanese language, which means “healthy, strong, and brave” in English.
*Follow her on Twitter, Facebook and Instagram.