English actress Ellie Kendrick famous for her portrayal of Anne Frank on the BBC’s The Diary of Anne Frank (5 episodes), Meera Reed in the HBO series Game of Thrones (16 episodes), and Ivy Morris in BBC One’s revival of Upstairs Downstairs (3 episodes). She played Helen in Misfits (5 episodes). She made her film debut in 2016’s The Levelling. Ellie was born on June 6, 1990 as Eleanor Lucy V. Kendrick in Greenwich, London, England. 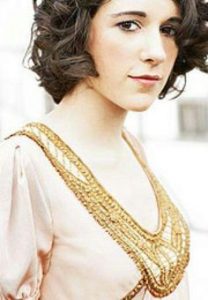 Ellie Kendrick Facts:
*She was born in London England.
*Her father is a law officer.
*She was announced as a guest star in the third season at San Diego Comic-Con 2012.

“It was fantastic returning to ‘Being Human’. When I got cast in the role, at first I just thought it was for one episode, and the fans were really great about it, and it was really nice having that reaction.” – Ellie Kendrick