Emayatzy Corinealdi is an American actress, best known for her starring role as Ruby in the 2012 independent film Middle of Nowhere. In 2014, Corinealdi was cast as Tessie Graham in the Amazon drama series Hand of God, and starred in the 2019 limited CBS series The Red Line. Her other television credits include Ballers, Roots, The Young and the Restless, and Criminal Minds. Born Emayatzy Evett Corinealdi on January 14, 1980 in Fort Knox, Kentucky, USA, to parents Rosemarie Hilton and Edward Corinealdi, she was raised between Germany and the U.S. states of Ohio, Kansas, and New Jersey as a member of a military family. She studied in New Jersey at the Actor’s Training Studio, then at the William Esper Studio in New York City, then at Playhouse West. 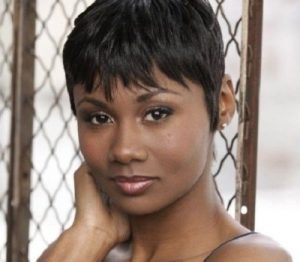 Emayatzy Corinealdi Facts:
*She was born on January 14, 1980 in Fort Knox, Kentucky, USA.
*Her mother is African-American from Ohio while her father is Panamanian.
*She made her feature film debut as the lead in the Ava DuVernay film Middle of Nowhere (2012).
*Follow her on Twitter and Facebook.