Actress Emilia Clarke was born Emilia Isabelle Euphemia Rose Clarke on October 23, 1986 in London, England. Her father is a theatre sound engineer and her mother, Jennifer Jenny Clarke, is a businesswoman. She has an older brother. Emilia is best known for her role as Daenerys Targaryen in the HBO series Game of Thrones, for which she received an Emmy Award nomination for Outstanding Supporting Actress in a Drama Series in 2013. She had her first film role in the 2012 British film Spike Island. Emilia has a perfect body which measures breast 34, waist 24 and hip 34. She has a height of 5 feet and 2 inches which is around 157 cm. 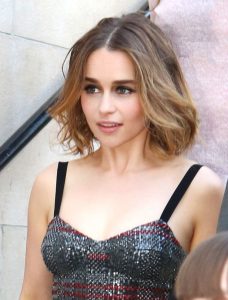 Emilia Clarke Facts:
*She has one younger brother.
*She has a dog named Roxy.
*She can sing and play some piano, flute and guitar.
*She was nominated twice for an Emmy Award for Outstanding Supporting Actress in a Drama Series in 2013 and in 2015.
*Her sport skills includes horseback-riding, ice skating, rowing, running, sailing, skiing, swimming and tennis.
*She is highly skilled at alto, ballads, blues, cabaret singing and jazz singing.
*She was named “Sexiest Woman Alive” by Esquire magazine in 2015.
*She has a tattoo of a bumblebee on her pinky finger.
*Her favorite television series is Friends (1994).
*Follow her on Twitter,  Facebook and Instagram. / Emilia Clarke | Wikipedia, Emilia Clarke | IMDb