Actress Jennifer Westfeldt was born on February 2, 1970 in Guilford, Connecticut, the daughter of Constance Meyers and Patrick McLoskey Westfeldt, Jr. She is best known for the 2001 hit independent film Kissing Jessica Stein, her 2004 Tony nomination for Wonderful Town, and her 2012 film Friends with Kids. Westfeldt is of English, and some Swedish, Irish, French, and Scottish descent on her father’s side, and of German Jewish and Russian Jewish descent on her mother’s side. 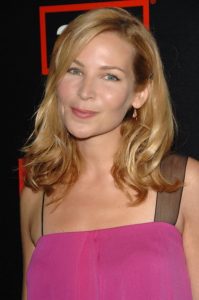 Partner: Jon Hamm (1997–2015)
*In 1997, Westfeldt began a relationship with actor Jon Hamm.
*In September 2015, Westfeldt and Hamm announced they were ending their relationship.

Jennifer Westfeldt Facts:
*Her mother, Constance Meyers, is Jewish.
*She has a German Shepherd dog named Cora.
*Won a 2004 Theater World Award for the Broadway revival of “Wonderful Town.”