Emily Atack is a British actress, television personality, and author. She is best known for portraying Charlotte Hinchcliffe on the E4 comedy series The Inbetweeners from 2008 to 2010. Atack’s other notable works include Keith Lemon shows, Lemon La Vida Loca, The Keith Lemon Sketch Show and The Keith & Paddy Picture Show. Her film credits include Outside Bet, Dad’s Army, Zombie Spring Breakers, Lost in Florence, Iron Sky: The Coming Race and Patrick. In 2018, Atack appeared on I’m a Celebrity…Get Me Out of Here. Born Emily Jane Atack on December 18, 1989 in Luton, United Kingdom, she is the daughter of actress and singer Kate Robbins and musician Keith Atack. She has two younger siblings, a sister named Martha, and a brother, George. In 2019, she began dating TV director Rob Jowers. 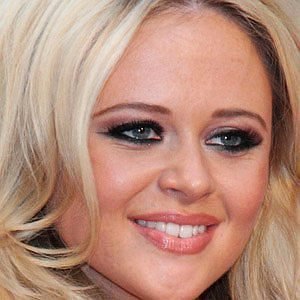 Emily Atack Facts:
*She was born on December 18, 1989 in Luton, United Kingdom.
*Her parents got divorced in 2008.
*She is the niece of Ted Robbins, Tim Atack, Jane Robbins, Emma Robbins and Amy Robbins.
*She started her acting career at the age of 17.
*In 2010, she was a contestant on Dancing on Ice.
*She made her feature film debut as Katie in the comedy film, Outside Bet (2011).
*On October 31, 2019, Atack released her first book, Are We There Yet?: To indignity … and beyond!.
*She is good friends with former Emmerdale star Kelvin Fletcher.
*Follow her on Twitter and Instagram.