Australian film actress and singer Emily Browning was born Emily Jane Browning on December 7, 1988 in Melbourne, Victoria, the daughter of Shelley and Andrew Browning. She belongs to English descent. She has two younger brothers, Nicholas and Matthew. Her start in acting came after a classmate’s father, involved in the acting business, noticed her “acting all ditsy” in a school play. She first appeared on screen at age 10 in the made for TV movie, The Echo of Thunder in 1998. Browning made her film debut in the Australian television film The Echo of Thunder, subsequently, she played recurring roles in Australian television shows Blue Heelers and Something in the Air. Her breakthrough role was in the 2002 horror film Ghost Ship, which introduced her to a wider audience. In 2005, Browning won the Australian Film Institute International Award for Best Actress for her portrayal of Violet Baudelaire in the film Lemony Snicket’s A Series of Unfortunate Events (2004). Browning has a perfect body which measures breast 33, waist 23 and hip 34. She has a height of 5 feet and 1 inches which is around 155 cm. 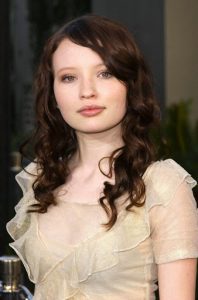 Emily Browning Facts:
*She is of English descent.
*She replaced Mia Wasikowska in Sleeping Beauty.
*She has her nose and belly button pierced.
*She is a pescetarian (a vegetarian who eats fish).
*She has a dog named Roxy and a cat named Jasper.
*Follow her on Twitter and Instagram.