Australian actress Margot Robbie was born Margot Elise Robbie on July 2, 1990 in Dalby, Queensland, the daughter of Sarie Kessler, a physiotherapist, and Doug Robbie, a former farm-owner. She was raised with two brothers and a sister on the Gold Coast, spending much of her time at the farm belonging to her grandparents. She belongs to Scottish and German descent. In her late teens, she moved to Melbourne to pursue an acting career. She started her career by appearing in Australian independent films directed by Aash Aaron. She was later cast in the popular soap opera Neighbours, which earned her two Logie Award nominations. She married Tom Ackerley in December 2016. Robbie is very beautiful lady with Blonde hair. Her eye color is Blue. 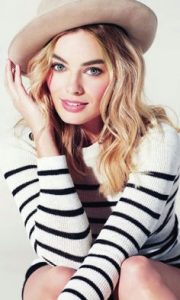 Margot Robbie Facts:
*She is of Scottish and German descent.
*Older sister of Cameron Robbie.
*She bought her tattoo gun on eBay.
*Ranked #22 on Maxim’s “Hot 100” of 2014 list.
*Her favorite professional sports team is the New York Rangers and the New Orleans Saints.
*Follow her on Twitter, Facebook and Instagram.