Emily Rudd is an American model, actress and social media star, best known for her role in the television series, Olive Forever. She has also appeared in such short films as Secret Santa, Best Buy, and Eye for an Eye. She has also worked with top fathion photographers such as Jared Kocka, Sara Kiesling, and Peter Jamus. Born Emily Ellen Rudd on February 24, 1993 in Saint Paul, Minnesota, USA, Rudd has an older brother named Daniel. She attended Saint Paul High School and graduated from college with a degree in theatre performance. Rudd began her career as a model and started her acting career appearing in the short film, Eye for an Eye. She has a boyfriend named Justin Blau aka 3LAU. 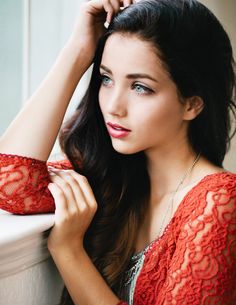 Emily Rudd Facts:
*She was born on February 24, 1993 in Saint Paul, Minnesota, USA.
*Growing up, she did karate.
*She has a bachelor’s degree in Theatre Performance.
*She started her career as a model .
*She is friends with DJ 3LAU.
*Follow her on Twitter, Tumblr, Facebook and Instagram.