Emmanuelle Vaugier is a Canadian actress of film and television. She is known for her recurring roles as Detective Jessica Angell on CSI: NY, Mia on Two and a Half Men, Dr. Helen Bryce on Smallville, FBI Special Agent Emma Barnes on Human Target, and as The Morrigan on Lost Girl. She played Addison Corday in Saw II and IV, and had a supporting role in the Josh Hartnett film 40 Days and 40 Nights. She voiced the character Nightingale in the video game The House of the Dead 2.

Born Emmanuelle Frederique Vaugier on June 23, 1976 in Vancouver, Canada, to French immigrant parents, she has an older brother named Jason. Vaugier attended Crofton House School, a girls private school, for 10 years until she transferred to Magee Secondary School. She started acting in grade school, after she was cast as an understudy in a play and had to fill in when the lead actor became ill. She made her acting debut in the 1995 made-for-TV movie drama, A Family Divided. She took up horseback riding in 2010; entered a Burbank, CA, horse show in which she placed third. 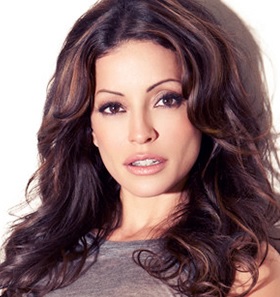 Emmanuelle Vaugier Facts:
*Born on June 23, 1976 in Vancouver, Canada, she grew up in a French-speaking home.
*She started modeling in high school, and modeled in Japan for three years.
*She placed at number 31 in Maxim Hot 100 List in 2006.
*She has two dogs Isabelle and Lily.
*She enjoys horseback riding and hiking.
*Visit her official website: www.emmanuellevaugier.com
*Follow her on Twitter and Instagram.