Emmy Rossum is an American actress, singer and songwriter. She is best known for her portrayal of Fiona Gallagher in the comedy-drama televisions series Shameless, and for her role as Laura Chapman in the 2004 science-fiction film The Day After Tomorrow. She starred as Christine Daaé in the film adaptation of The Phantom of the Opera (2004). Other notable acting roles include Claire Addison in Genius, Deladis Slocumb in Songcatcher, Katie Markum in Mystic River, Alexa Walker in Dare, and Maggie in Before I Disappear. As a singer, Rossum released her debut album, Inside Out, in October 2007, and released a Christmas EP the same year, titled Carol of the Bells. She released a follow-up album called Sentimental Journey in January 2013. 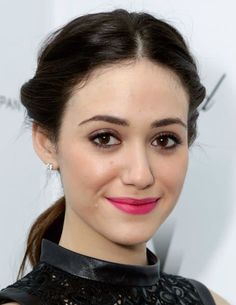 Emmy Rossum Facts:
*She was born Emmanuelle Grey Rossum on September 12, 1986 in New York City, New York, USA.
*She’s an only child.
*Her father is a banker and her mother is a corporate photographer.
*At age 7, she became a member of New York’s Metropolitan Opera Children’s Chorus.
*She was educated at the Spence School in Manhattan, an elite private girls’ school.
*She earned her high school diploma online via a Stanford University program.
*She took cooking classes at Le Cordon Bleu in London.
*She made her television debut in 1997 on the daytime soap opera “As the World Turns.”
*She made her theatrical feature debut in the 2000 indie film Songcatcher.
*Her favorite designer is Ralph Lauren.
*She is a fan of Audrey Hepburn.
*”Carmen” is her favorite opera.
*She is best friends with Leighton Meester.
*She is very close friends with Ashlee Simpson.
*She has been married to director and screenwriter Sam Esmail since May 28, 2017. She was previously married to Justin Siegel from 2008 to 2010.
*Visit her official website: www.emmyrossum.com
*Follow her on Twitter, Facebook and Instagram.