Erin Andrews is an American sportscaster, journalist, and television personality who works for FOX Sports. She also hosts Dancing with the Stars for ABC. She previously worked at ESPN from 2004 to 2012. Prior to joining ESPN, she was a TV studio host and sideline reporter for the following teams: Tampa Bay Lightning, Atlanta Braves, Atlanta Hawks, and Atlanta Thrashers reporting for TBS College Football. Born Erin Jill Andrews on May 4, 1978 in Lewiston, Maine, USA, to parents Paula Andrews, a teacher, and Steven Andrews, a TV journalist, her father is a six-time Emmy award-winning TV journalist. After graduating from high school in 1996, she attended and graduated from the University of Florida with a BA degree in telecommunications in 2000. Erin began her career with her FSN Florida as a freelance reporter from 2000-2001 before serving as a Tampa Bay Lightning reporter for the Sunshine Network from 2001-2002. On June 24, 2017, she married her boyfriend of 4 and a half years Jarret Stoll, following a 6-month-long engagement. 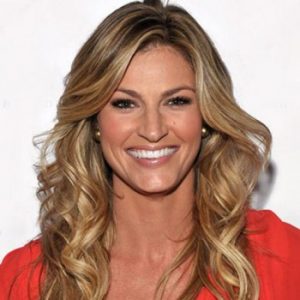 Erin Andrews Facts:
*She was born in Lewiston, Maine, USA on May 4, 1978.
*She was a cheerleader at her school.
*She was a member of Zeta Tau Alpha sorority in college.
*She was named “America’s Sexiest Sportscaster” by Playboy Magazine in 2007.
*She joined FOX Sports as a field reporter in July 2012.
*Follow her on Twitter, Facebook and Instagram.