Menna Shalabi is an Egyptian actress, known for appearing in Egyptian films. She has appeared in films such as Ezaet hob, After the Battle, Heya Fawda, Asef Ala Al Izaag, and Noor Einy. Menna’s television credits include Ayna qalbi, Banat, El, Harb Al Jawasees, Nyran Sadeeqa, and Haret Al Yahoud. Born Mennat Allah Hesham Shalabi on July 22, 1982 in Cairo, Egypt, she is the daughter of the famous dancer Zizi Mustafa. She has an older half-brother and half-sister from her father’s previous marriage. She began her film career, with early roles in Saher, Al (2001), Iw’a Wishak (Watch Out!) (2003), Film Hindi (2004), Kallem mama (2003), and Ahla Wl Awkat (2004). 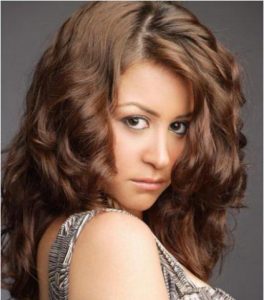 Menna Shalabi Facts:
*She was born on July 22, 1982 in Cairo, Egypt.
*She is the daughter of famous dancer and performer Zizi Mustafa.
*For her role in Al Saher, she was awarded Best Actress at the National Film Festival for Egyptian Cinema in 2001.
*She was close to director Radwan El-Kashef.
*Her favorites artists are Julia Roberts, Richard Gere, Demi Moore and Sharon Stone.
*Follow her on Facebook and Instagram.