Essence Atkins is an American actress and model. She is best known for starring as Tasha Yvette Henderson in The WB sitcom Smart Guy, Dee Dee Thorne in UPN sitcom Half & Half, Suzanne Kingston-Persons in TBS comedy series Are We There Yet?, Samantha Owens in the syndicated sitcom Mr. Box Office, Ashley Wayne in NBC sitcom Marlon, and Amara Hughesken in the Oprah Winfrey Network prime time soap opera, Ambitions. Atkins has also played prominent roles in the films Deliver Us from Eva, How High, Dysfunctional Friends, Dance Flick, A Haunted House and A Haunted House 2. Born Essence Uhura Atkins on February 7, 1972 in Brooklyn, New York, to parents Sandy Nelson and Geoffrey Atkins, she attended Professional Children’s School. Atkins began her career as a teenager guest starring in a 1986 episode of The Cosby Show. She married Jaime Mendez in 2009, and the couple had a son named Varro Blair in 2011 before getting divorced in 2016. 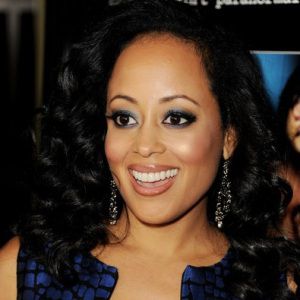 Essence Atkins Facts:
*She was born on February 7, 1972 in Brooklyn, New York, USA.
*Her full name is Essence Uhura Atkins.
*She started her career as a teenager guest starring on NBC sitcom The Cosby Show in 1986.
*She is friends with Gabrielle Union, and Alfonso Ribeiro.
*Follow her on Twitter, Facebook and Instagram.