Ethan Cutkosky is an American actor. He is best known for his portrayal of Carl Gallagher on the Showtime series Shameless, and for his role as Barto in David Goyer’s supernatural horror film The Unborn. In 2010, Ethan starred in the independent thriller Conviction, with Hilary Swank and Sam Rockwell. Born Ethan Francis Cutkosky on August 19, 1999 in St. Charles, Illinois, USA, to parents Yvonne and David Cutkosky, he is of Polish, English, Scottish, and Irish descent on his father’s side, and of Mexican descent on his mother’s side. Ethan began his career as a model for print ads and commercials at the age of four in his hometown of Chicago. He made his film debut in 2007 at age seven in the Christmas comedy “Fred Claus.” In 2015, he began dating actress Brielle Barbusca. 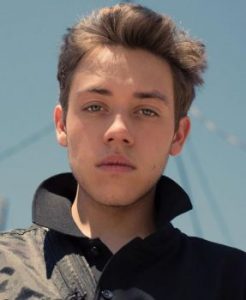 Ethan Cutkosky Facts:
*He was born on August 19, 1999 in St. Charles, Illinois, USA.
*His parents are Yvonne Cutkosky and David Cutkosky.
*He began studying martial arts at the age of four and became a second degree black belt in Taekwondo.
*He has his own clothing brand called Khaotic Collective.
*His hobbies include skateboarding, bike riding, jet skiing, photography and taekwondo.
*Ethan was arrested for DUI in Los Angeles in November 2017.
*He is a member of SAG AFTRA union.
*Follow him on Twitter and Instagram.