Eugenia Volodina is a Russian fashion model who has appeared in numerous editorials for magazines like Vogue, Harper’s Bazaar, Vanity Fair, i-D, Numéro and Elle. She is also known for being the face of Valentino Fragrances. She has also appeared in campaigns for many important fashion houses such as Alexander McQueen, Balmain, Calvin Klein, Louis Vuitton, Roberto Cavalli, Stella McCartney, Chanel, Christian Dior, Dolce & Gabbana, Gucci, Valentino, Versace, and Victoria,s Secret. She was a part of a Gucci ad campaign in 2002 alongside Natalia Vodianova. Born on September 23, 1984 in Kazan, Russia, Volodina started her modeling career at the age of 15, attending an open call at a casting agency in 1998. Volodina’s big break however came in 2002 when fashion photographer Steven Meisel featured her in Italian Vogue. In 2009, she began dated actor Mickey Rourke. 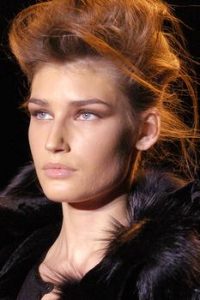 Eugenia Volodina Facts:
*She was born on September 23, 1984 in Kazan, Russia.
*She began her modeling career when she was only 15 years old.
*She has walked in Victoria’s Secret fashion show in 2002, 2003, 2005, and 2007.
*She appeared in the 2005 Pirelli Calendar alongside Adriana Lima and Julia Stegner.
*She is represented by the agencies Supreme Management, Uno Models, IMM Bruxelles, Elite Model Management, Modelwerk, Public Image Management, and MP Stockholm.
*Follow her on Instagram.