Eva Amurri is an American actress of film and television. She is known for her roles in television, such as Californication, New Girl, Mercy, How I Met Your Mother, The Secret Life of Marilyn Monroe, The Mindy Project and Undateable, and in the films The Banger Sisters, Mothers and Daughters, The Education of Charlie Banks, Saved!, That’s My Boy and New York, I Love You. Born Eva Maria Livia Amurri on March 15, 1985 in New York City, New York, she is the daughter of Italian director Franco Amurri and American actress Susan Sarandon, and older half-sister to actors Jack Henry Robbins and Miles Robbins. She belongs to Italian, English, German, Irish and Welsh descent. She is a 2007 graduate of Brown University. She made her TV debut in a 2001 episode of the popular NBC series Friends. She has been married to Kyle Martino since October 29, 2011. They have two children, a daughter Marlowe Mae and and a son, Major James. 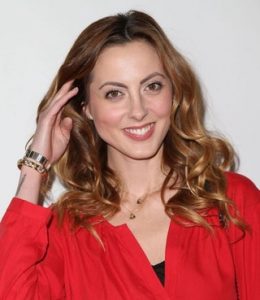 Eva Amurri Facts:
*She is the daughter of actress Susan Sarandon and director Franco Amurri.
*She is of Italian, English, German, Irish and Welsh descent.
*She is a graduate of the Brown University.
*She served as a guest-host on the series Attack of the Show in 2009.
*Follow her on Twitter, Facebook and Instagram.