Maggie Gyllenhaal is an American actress. She is best known for her impactful performances in films, including Crazy Heart, The Dark Knight, Donnie Darko and Nanny McPhee Returns. She played Lee Holloway in the 2002 erotic romance film Secretary. For her role in the 2014 TV Mini-Series The Honorable Woman, she received a Golden Globe Award for Best Actress in a Mini-Series or TV Movie. Born as Maggie Ruth Gyllenhaal on November 16, 1977 in Lower East Side, New York City, she is the daughter of director Stephen Gyllenhaal and screenwriter Naomi Foner Gyllenhaal, and older sister of Jake Gyllenhaal. Grew up in Los Angeles, she is of Swedish and English descent on her father’s side, and of Russian and Polish descent on her mother’s side. She made her film debut in Stephen’s film Waterland in 1992. She was nominated for an Academy Award for Best Supporting Actress for her role in the 2009 film Crazy Heart. She has been married to Peter Sarsgaard since 2009. They have two children. 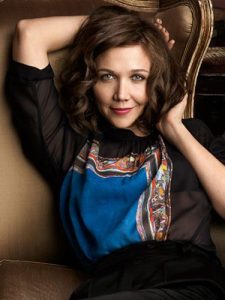 Maggie Gyllenhaal Facts:
*Her dad was raised in Swedenborgian religion.
*She is the older sister of Jake Gyllenhaal who is also an actor.
*She was ranked #58 in FHM’s “100 Sexiest Women in the World 2005” special supplement.
*She has also worked as a waitress in a Massachusetts restaurant.
*Gena Rowlands is her favorite actress.
*She is good friends with actress Emma Thompson.
*Follow her on Twitter, Facebook and Instagram.