Brenda Song is an American actress, best known for her starring roles as London Tipton in TV series The Suite Life of Zack & Cody and The Suite Life on Deck. She played Veronica in the Fox TV series Dads. She received the 2001 Young Artist Award for Best Performance in a TV Movie for The Ultimate Christmas Present. Born Brenda Julietta Song on March 27, 1988 in Sacramento, California, her mother, Mai Song, is Thai-American and her father is Hmong. She began acting at the age of six. Her first television appearance was in a Little Caesars commercial. She made her debut film appearance in the 1996 movie Santa with Muscles. She has been in a relationship with former child star Macaulay Culkin since 2017. 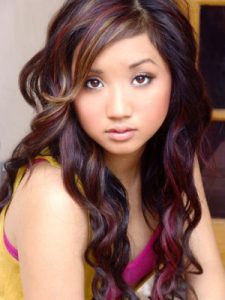 Brenda Song Facts:
*Her mother is Thai-American and her father is Hmong.
*Her family immigrated to America from Laos in 1976.
*She began modeling at the age of 3.
*She graduated from high school at the age of 16, and studied business while in college.
*She is fluent in Hmong and Thai.
*She holds a black belt in taekwondo.
*She was named an All-American Scholar in ninth grade.
*She ranked #10 in 2006, #5 in 2007 and #3 in 2008 in Maxim magazine’s Asian Hot 100 editions.
*Marilyn Monroe and Angelina Jolie are her idols.
*She has a Maltipoo dog, Teddy.
*She is close friends with actors Vanessa Hudgens, Ashley Tisdale, Frankie Muniz, and Kristin Herrera.
*She was once engaged to Trace Cyrus.
*Follow her on Twitter, Facebook and Instagram.