Evan Rachel Wood is an American actress, model, and singer. She is best known for her roles in films, such as Thirteen, The Wrestler, and Across the Universe, and in the television Mildred Pierce, Westworld and True Blood. For her role in Thirteen, she earned a Golden Globe nomination. Born September 7, 1987, in Raleigh, North Carolina, USA, to Sara Lynn Moore and Ira David Wood III, she belongs to English, Irish, Scottish, and German descent. She has three siblings, Ira IV, Dana and Aden. She attended junior high school in the San Fernando Valley but left because she disliked the social environment of high school. She was then home-schooled, and received her high school diploma at 15. She began acting in the 1990s, appearing in several television roles, including Once and Again and American Gothic. Her breakthrough role came when she played Tracy Louise Freeland in the 2003 film Thirteen. Her personal relationship with singer Marilyn Manson received media coverage. She was married to Jamie Bell from 2012 to 2014. They had a son in November 2013. 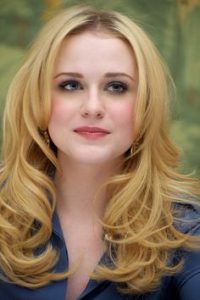 Evan Rachel Wood Facts:
*She was born on September 7, 1987 in Raleigh, North Carolina.
*Her parents divorced in 1997.
*She has a black belt in tae kwon do.
*She is openly bisexual.
*Cate Blanchett is her favorite actress, and Gene Wilder is her favorite actor.
*She enjoys swimming, horseback riding, skating and singing.
*In 2011, she was placed at #31 in the list of “Hot 100” women by Maxim.
*Follow her on Twitter, Facebook and Instagram.